Recovering from her latest illness was a battle for Zelroo, but she made it through. Her desire to eat disappeared right when her body needed the extra glucose. To make up for it, she developed a startling appetite! Zelroo tore through the garden and ate everything. The lemon trellis was bare, and all of the herbs struggled to keep up with her! Zelroo was particularly interested in the gentian, which matched her eye makeup. She also showed me how flawed the C1 herbs (and weeds) are… Another set of items to add to my update list! How confusing it all was for Zelroo.

In a curious sort of way, the only other Norn in my world, Thrennion, showed absolutely no interest in Zelroo. It was rather nice to see them enjoying their own separate lives, without me having to head out on egg patrol. Thrennion surprised everyone by handling his genetic mutations very well! I thought he was going to be pretty miserable, and I was wrong. Look at that smile! As unpolished as the Forest Norns look, this old face sprite is just adorable. Thrennion even posed with one of the old carrot seedlings, as if to laugh at it! After the beta testing phase, the carrots would finally work correctly and stop creating so much confusion! I still had the other food items to look into, although the carrots were probably the worst offenders.

Zelroo’s voracious appetite and obsession with colorful plants took her a little too far… Or rather, too far underground. The deathcap mushroom sort of resembled the gentian with its bright colors. She sampled it, and immediately knew that it was pretty awful! I only rolled my eyes and brought Zelroo some real food. Since she was being such a good eater, her life force barely fell. I guessed that it was just one of those adventurous things that most Norns had to do during their lifetime! I used to fear the deathcap, but it’s actually not too dangerous to a healthy Norn or Grendel. Just don’t let anyone get too comfortable with it: It can still be a lethal weapon! 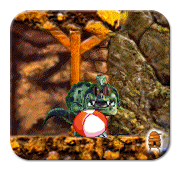 The adventure of a lifetime never really got going with Dahloi, courtesy of his multiple naps. I visited him when he was fairly well-rested, though, and he was having a ball… With the ball! Horrible puns aside, it looked like he didn’t need a glamorous journey around Albia to find his happiness. He just needed a toy, which reminded me of his time in the ball brigade, so long ago. Creatures can’t tell the difference between objects classified the same way, so a ball and a spinning top are exactly the same in their minds. Still, I liked to think that Dahloi still remembered the fun times he used to have with everyone, when bouncing the ball was the only thing a Grendel needed to think about. Enjoy those memories, Dahloi!

This is just a reminder that in Creatures 1, I hatch one generation at a time to keep family lines a little cleaner. There will be no more Norns, nor Grendels, in this generation. Once everyone finishes out their lives, I will be taking a break from this world to devote time to finishing up a few C1 improvements. This includes the long-awaited and long-delayed spriting project to fix the Norns. Don’t worry: The next C1 generation will eventually happen, and other updates will still be posted!